If that cell had a 20 foot ceiling, a person could easily put in a loft with a mini-bar and a disco ball. With a 30 foot ceiling you could build an apartment and live in it with your mum like this guy, but I digress. 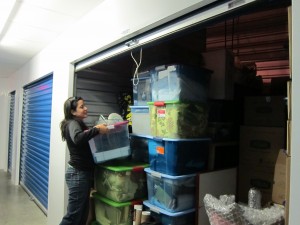 We’ve taken most of our worldly possessions and put them into a 10x10x16 storage locker on the third floor of a storage facility on the outskirts of DC (not the cat though). Three weeks ago we moved the stuff we already had in storage from another storage locker, also on the third floor of the same facility — basically just down the hall. Crazy? Maybe. But 4 hours of work yielded two worthwhile outcomes: 1) a savings of about $1,000 dollars over the course of a year with a new contract and rate and 2) more space because of the third dimension.

Only then did we add everything we actually use, wear, sit-on and cook with from our condo. By investing in Tupperware galore and creating Jenga-like towers of belongings, we created a base height of possessions that was 8 feet tall, with some items climbing as high as 15 feet. By stacking as high as possible, we were able to create enough new space to keep the couch and chair we were planning to get rid of and still have a little room to spare.

I’ll be honest. It was a deeply satisfying process. Josh’s only regret is that we didn’t stack higher, though perhaps we learned enough from Icarus to know this would be folly!

Now, after four days in DC finishing the packing, tying up lose ends and saying a final farewell to Misha the cat, I’m back in California with Josh and his family and all of our trip related baggage and gear. We’ll update you on when the trip resumes with a new departure date. But for now… Happy New Year! May it bring you happiness, health and laughter.

4 Responses to “The Third Dimension”

Before leaving the country, Sasha and I planned to spend some time with family that we weren't going to see...