Sasha and I experienced Kabuki theater today – the show is quite literally going on despite the quake.

I’ve never watched theater before in a language I didn’t understand. I thought I was following the storyline until one of characters turned into a cat and ate one of the other characters. Still trying to figure that one out.

The seats were designed for people who are about a foot shorter than I am and without enough room for legs, let alone bags. But somehow, during intermission, everyone whipped out huge Bento boxes – we didn’t get that memo (we might have, but it must have been in Japanese).

No pictures were allowed, so I can’t show you the show, but here is a picture of one of the smaller bento boxes. 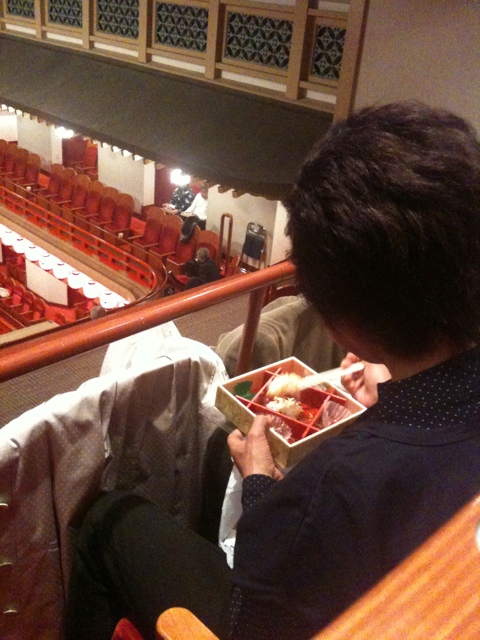 We’re going to attempt to leave for Singapore tomorrow. That means a bullet train to Tokyo and flying out from Narita airport. It also means traveling to a region that was hit by the quake and is quite a bit closer to the now famous nuclear plant. We can’t complain about our circumstances given everything else that’s going. We’re just hoping that tomorrow is boring ride on mass transit.

One Response to “Bento Box Surprise”

Konbanwa (Good evening)! After three packed days in Kyoto, Japan, Sasha and I thought we should take a moment to...