Josh has been sporting the shaggy hair-do recently: he hasn’t had a haircut in four months. In fairness, we originally planned to leave in December and, though he was waiting to get it all chopped off in some random place, it was never meant to get this long. But long it was.

The barber, with a room full of regulars, took his job very seriously. The lack of common language allowed only one direction: “this short” with fingers half an inch apart. He was on it. Combing Josh’s hair, giving up on the knots and just going straight for the clippers.

After much hair loss, a straight-blade shave, goatee trim and $5.14 USD we were done.

Click on the first picture, then use directional arrows for slideshow. 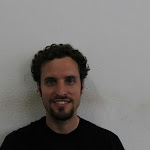 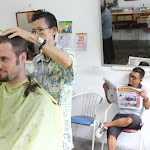 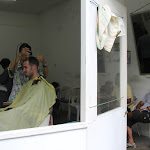 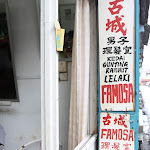 We checked country number two off the list today as we entered Malaysia by bus. Our first stop: Melaka. On...