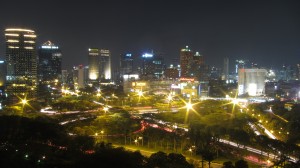 We’ve had the privilege of working with National Democratic Institute (NDI) in Indonesia this week, sharing our experiences in politics with political parties here. The great NDI staff here spent time briefing us on the Indonesian political system. As these things often go, trainers become the trainees and we were no exception. I want to share with you some of my observations.

First off, a few facts about Indonesia. Indonesia has 240 million people, it’s the fourth most populous country in the world, most populous Muslim country in the world, it has the second largest Facebook population after the United States and it’s the third largest democracy in world. Jakarta has the worst traffic I’ve ever seen. And the country is comprised of 17,508 islands.

Indonesia is an exceptional country preparing for a very exciting time in its political development. In 2004, they had their first direct presidential election. Five years later, in 2009, the President (SBY) was reelected. In 2014, they will have their first transfer of power from one President to another. The political parties are getting ready for this important election.

That Facebook statistic, #2 on Facebook (35 million Indonesians), is particularly interesting given that only about 15% of Indonesians have internet access. Access to the internet here is expected to triple by 2015, which means that their Facebook population is likely to explode even more than it already has. To put that in perspective, they had only 831,000 people on Facebook in 2008. Today, a significant portion of Facebook use is bypassing the computer entirely here, with their mobile phone as their only portal to Facebook.

The Arab spring has already shown the power of social media in developing countries, but it has been a real lesson for me to see how quickly a developing country can transition offline to online.

Sasha and I travel because we love new experiences and learning about other cultures. We love the way cultures do the same things differently: what people eat for breakfast, how they ride the bus, where they drink a beer after work.

We’ve seen people on Facebook everywhere we’ve traveled. We saw it on a laptop at a flip-flop stall in a street market in Malaysia and staff laughing at a wall post at the tourism office in Thailand. What’s surprising to me is that, aside from the language they select from the user interface, people around the world are interacting with friends through Facebook exactly the same way. They’re updating their status, sharing articles and videos and accepting/ignoring friends.

I am usually quick to mourn the loss of distinct cultures, regardless of the benefit. In this case, Facebook is essentially becoming a universal interface for social lives. I have to wonder if this will bring people from around the world closer together by creating a common vocabulary for social interaction — the way Google, the verb, means the same thing everywhere. If it really does that, I might have to make an exception.

We arrived in Jakarta, Indonesia late last night after a few days in Bali filled with $5 one-hour massages, motorbike...