« Not Your Chevy Impala

You have to book ahead to see the gorillas in Rwanda as they only give out 64 permits a day. I choose not to get a permit, mostly for budget reasons, and Josh had seen them on a previous trip so he was out too. A turn of events happened and a friend couldn’t use her permit to see the gorillas and instead of it going to waste, she gave it to me the day before. While I still wish she was there in my place, I am one lucky and thankful girl. 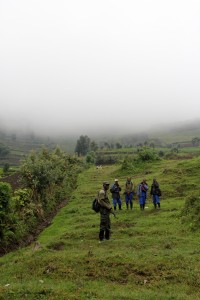 I’ve seen Gorillas In The Mist a bazillion times, as a child and as an adult. Though Dian Fossey hated the idea of Gorilla tourism passionately, and would probably have hated the 64 permits a day that help pay for conservation, I couldn’t help but be excited to walk in her path anyway. Many genuinely believe that without her activism there would be no Gorillas left today.

Though I brought next to nothing for the trek, I hired a porter for 10,000 Rwandan Francs (aprox $17). They say that the porters are former poachers and though poaching hasn’t been reported since 2003, like many others, I wanted to help ensure that they can continue to make money with the gorillas alive, not dead. So, he carried my 7lbs in weight and off we went…

Our group of 9 had to split up as only 8 permit holders are allowed per gorilla family, and there are 8 gorillas families that tourists are allowed to visit. So, 5 of us went together to see the Agasha Group. Agasha means “Special” in KinyaRwandan. 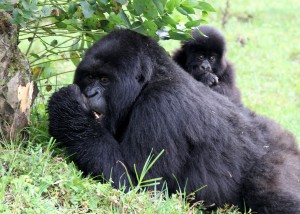 The group is named after the groups majestic silver-back leader. The story goes that after coming of age, he wandered alone through the forest being a bit of a wife-stealer and attracting females away from existing families to start his own. Quite the Gorillas lady magnet! Agasha is now a group of a whopping 27 gorillas. Only one silverback, of course, and 12 babies. Wow. He must be some wooer.

Most visitors have a 2-3 hour hike through serious forest with nettles up to your shoulder. We hiked for about 45 minutes through the misty incline at the edge of the volcano before we got to a clearing in the forest and there they were… We met Agasha first and were only 5-6 feet from him at times. The adrenaline was pumping.

The Agasha family walked through the clearing for about a half a mile and we walked with them. We watched babies hang onto their mamas, a bunch of the gorillas sit in a group and share some particularly tasty bark and groom each other. Agasha sat cross legged just like I do.

They were pretty spread out and we couldn’t be near all of them at once. There was an amazing moment when Agasha ran fast over a hill towards one of the females and pounced on her. Hard. Urine sprayed out of her like a fountain from the surprise and pressure (he’s about 450 pounds). He just sat on her for a few minutes: a submission lesson. Then he got up and pounded on his chest. I held my breath as the chest thumps echoed through the valley. He showed his dominance and place in the family alright! Our guide said that he was punishing her for getting too far away and in turn making it harder to protect her. She noticeably doted on him after that and followed just steps behind him as he went to round up the rest of the group.

The highlight was just being there. It was nothing like a zoo, which make me cry anyway. It’s amazing to see how much their mannerisms and expressions are so clearly like ours. Or perhaps ours are like theirs.

One fun fact and difference: unlike our unique markers, which are our fingerprints, gorilla noses are their unique markers. It made me stare at all of their noses. I felt quite rude!

Click here to cancel reply.
« Not Your Chevy Impala

Not Your Chevy Impala

We had a day off yesterday and spent it on safari in Akagera National Park in Rwanda with our fellow NDI...