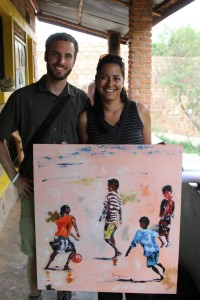 I’d spent a couple days with a new friend in Rwanda. Enraptured with his stories and explanation of the scenery and people we were passing by, on the second day he shared his story with us. In Rwanda, ‘your story’ seems to always mean ‘your story during genocide’.

Since it’s not my story to tell, please understand that I’m not going into the details out of respect.

“James” was studying in Uganda when the 1994 genocide broke out, he quickly became a conscript to the liberating guerrilla army (that is now the ruling party). Being a conscript had it’s up and down sides for “James”. In the war he lost 4 grandparents, his father, 2 brothers and 7 cousins. They were killed by his neighbor, who was also his best friend.

Think about that last sentence for a minute. I had to.

After the war, when the killer was in jail and “James” saw him at a sentencing hearing, he described, in detail, how he killed his family and said that had he known “James” was a Tutsi, they never would have been friends growing up. Needless to say that he did not get a reduced sentence.

In addition to “James”, his mother, 3 sisters and 1 brother survived. As the eldest child he worked hard to take care of everyone. He made sure than each one of his siblings finished secondary school, and then university. I don’t know but I imagine that was a pretty major accomplishment all in one family in the immediate years after the genocide. One sister has even finished her masters and is about to start working on her PhD. And one brother became an artist after school.

This is where the painting comes in… 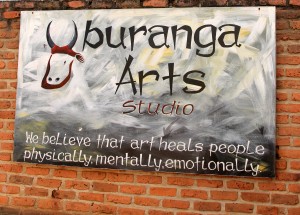 “James” gave me his brothers name and the artists cooperative, Uburanga Arts, where he shows his work and on our last day in town we made a visit. We’d already committed in our minds that if we liked the brothers work, and could afford it, we’d be thrilled to buy a piece.

While the other artists’ work at the cooperative was truly stunning, we were bummed that we didn’t like the brothers work, until we saw one tucked away in the corner and both of our eyes lit up. It’s now ours.

I love that we’re going to have this bright happy painting in our house to remind us of Rwanda and the people we met here. They are wonderful, as is our new painting.

One Response to “Living to Paint”

It was almost a very expensive rookie mistake packing my yellow (immunization) card in my check-in baggage when flying from...