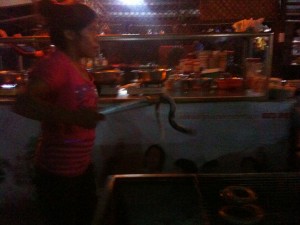 Food has been one of the highlights of the trip so far. Dishes we’ve never had, that we don’t know the name of and in some cases aren’t even sure what was in them. Belly-filling, mouth-watering meals that cost a dollar and you find yourself ordering again and again for fear you won’t get to have them again — at least not like this. Street food easily competes with the best food in many of these towns – often it’s the only choice.

But there is a dark-side. We wrote about ‘spare parts’ in Singapore, about Pringles flavors gone wrong and there has been lots of food that our gut instinct suggested we pass on.

On our hike to the home-stay in Laos a mean looking dog ran out of a house to bark and growl at us. Our guide snickered a little and gave the dog a nickname on the spot: BBQ.

Even though we didn’t see dog on any menus, we know people in Laos eat dogs. The rural poor raise them and sell them to people well enough off to have meat as part of their diet along with their chickens and pigs. We hear that some of the neighboring countries aren’t as reserved.

Today, we entered Cambodia where we’ve been told again and again they eat anything. Our bus pulled into a roadside cafe typical of our bus trips so far. Don’t worry, no dogs on the menu.

While ordering food, we noticed a writhing basket of eels under the grill.

As I asked for my fried rice, a girl about 15 years old put the first eel on the grill using tongs. Uncomfortable as it’s skin touched the grill the eel attempted to make a break for it. Reclaimed by tongs, it was reseated on the grill, but the coals weren’t hot enough so it was returned to the basket still wriggling.

Attempt #2 began when a hand fan was at the ready to heat things up a little. The eel went back on the grill this time held in place and fanning commenced. The eels head slid down through slats of the grill and hung in the coals for a couple seconds. It decided that wasn’t a good position and cames back out. Back to the basket it went with a whack from the tongs for good measure.

Attempt #3 began after a hot coal from a neighboring grill was added to the mix as well as the hand fan. Held in place by tongs this eel doesn’t go back to the basket.

We traveled through southern Laos faster than we'd planned so we could meet up with our friend Brendan, whose visiting from...