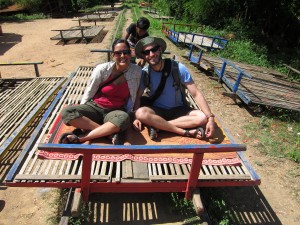 And a bamboo raft it was with an engine from a cheap motorcycle to power it down the tracks. But my skepticism was totally misplaced. It was amazing. Mostly because it sped down the tracks like a roller-coaster that wouldn’t end (12 km return) but also for it’s ingenuity.

Here’s the video of our ride.

The Khmer Rouge left the country devastated after their “experiment” on the Cambodian people and infrastructure. After the war in the early 1980’s, locals villagers made use of the tracks that still existed by devising this brilliant bamboo train. 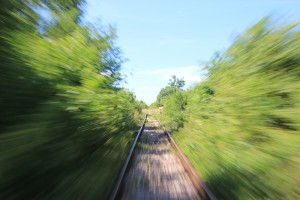 The “train” – known as a norry in Khmer – is a 3m bamboo raft that rests on a barbell-like frame that rides the rails and a fanbelt connects it to a small motorbike engine on the back that makes it whiz down the tracks at 40 km/h. They say that it can carry 15 people or three tons of rice.

But what do you do when there’s only one track and two trains speeding in opposite directions meet? Dismantle everything of course.

Here’s how it works: The driver (usually a 12 year old boy) keeps a look out on the horizon for an approaching train. On sighting, they both stop and one is dismantled to give way. Easy when you only have a raft, small engine and barbells. But don’t forget the people and goods on board, they all need to be unloaded before the train can be dismantled. The rule is that the car with the fewest passengers has to cede priority. Motorbikes pull rank though. 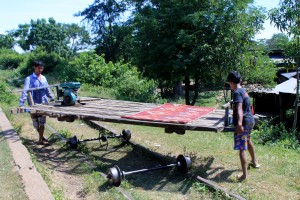 Lonely Planet asks: “what happens when a bamboo train meets a real train?” Well, the drivers supposedly know the train’s schedule and time their trips. The real trains also toot their horns and can be heard from a distance. I was just hoping my driver had great eyes and hearing. And he did. He saw an oncoming bamboo train, when we didn’t, and slowed to dismantle.

In a few months the government plans to ban locals from using the bamboo “train” as the railway is to be upgraded and the real trains will go too fast to be seen in time.

I am so impressed at the ingenuity of the bamboo train and am sad that the villagers won’t be able to use this super convenient and cheap mode of transport. 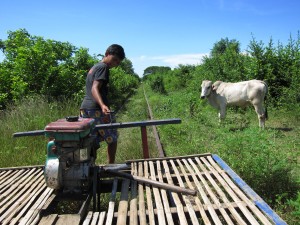 3 Responses to “Bamboo Ride in Battambang”

We spent the last few days exploring Angkor with our friend Brendan from Washington, DC. Angkor Wat is said to...