I had no idea circular rainbows existed when we arrived at the monastery and I certainly hadn’t seen one. But Sasha pointed up at the sky and there it was.

Before we had an opportunity to Google it, we called it a circular rainbow because that’s what it looked like, but technically what we saw is called a sun halo. I can’t imagine what would have happened to the double rainbow guy if he’d seen this. 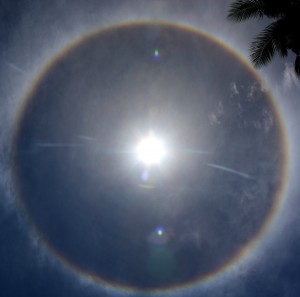 Directly above our heads in the middle of an almost clear blue sky there was a huge, perfectly circular, rainbow around the sun.

As we stood there gaping at it, we asked the monks at the temple if they’d ever seen it before and, assuming we understood their English correctly, they said “all the time.” However, our tuk-tuk driver called his wife to tell her to go outside and check it out. She then called their children, so we figure it couldn’t be that common to the area.

After Googling we discovered that sun halos come in a couple of different varieties. We’re pretty sure this was of the 22 degree variety, which is caused by tiny ice crystals in cirrus clouds doing what water droplets do for normal rainbows.

I took a bunch of pictures. Sadly it was so big that I couldn’t get the entire thing in a single frame, but I stitched two photos together that I took in sequence so I could give you an idea.

Have you ever seen a sun halo?

In Battambang, Cambodia, a small town that most tourists don’t go to, the bamboo train is a the top of...