« Kep: A Vacation From Our Vacation

The Hunt For Pencil Shavings

Our friend Brendan, while visiting us on the road in Siem Reap, Cambodia, was interested in visiting art galleries between temple hopping at Angkor Wat. He didn’t need to twist my arm but I was only window shopping (traveling for a year has its limits sadly!).

We stopped at a funky hotel for a bite in their loungy art gallery that had works by several artists. I fell in love with larger than life pieces by Chan Dany. The mosaic-looking pieces were actually made of pencil shavings. Yes! Pencil shavings I say! 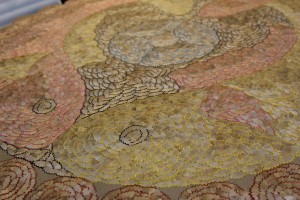 Think about sharpening a pencil using a regular old pencil-sharpener. Now think of all those curly pieces of pencil-wood edged with the paint from the outside of the pencil that indicates the color. Now imagine using thousands of those little curls, like tiles or scales to make immense images. In Chan Dany’s work they’re so intricate that you wouldn’t even know the it was pencil shavings unless you were up close and personal. Once I pointed out how they were made, Josh did a double and a triple take. And thank goodness, because I was in love but I also had to consider the pact that Josh and I have where we we both need to be in agreement on art, furniture and basic home decorations in order to even consider getting it.

But despite the fact that we both loved the work, it was way out of our price range. But so unique and huge in scale (many of the pieces were the size of a large front door) I could understand why. So, it took it upon myself to do some sleuthing once we got to Cambodia’s capitol, Phnom Penh, and try find the artist to see if he had any smaller pieces that might fit into our budget.

Chan Dany with us and our pencil shavings piece.

Cambodia has, like many places in SE Asia, skilled copy cats, from clothing, to art (you can get the Mona Lisa here for $40), to DVD’s, just name your heart’s desire as long as you don’t expect top quality. But true artists are hard to find.

Mostly because during Khmer Rouge’s abysmal “experiment”, universally acknowledged as genocide, intellectuals were considered a threat to the communist ideal. A nation of lawyers, doctors, professors, writers, journalists and artists were interrogated and slaughtered. As a result, Cambodia is still trying to regain its footing in professional and intellectual trades more than 30 years later. For example, despite the number of motorcycles and subsequent crashes in Cambodia, there isn’t a brain surgeon anywhere in the country, even if you had the money to pay for one.

The same is true for artists. There wasn’t anyone left to teach the centuries-old crafts, symbolism and techniques used in Cambodian art from carvings and paintings to weavings. Things are looking up, but it’s still a small pool, today there are a total of eight art students in the whole country. I learned that Chan Dany, who I was about to search for, is one of the few professional artists in the country.

My plan was to go to the popular art galleries and ask in all of them for “Chan Dany”. Not too sophisticated, I’ll admit, but it was a plan. I did have a promising lead, so I started there. Lo and behold, at the first gallery I went to I met Chan Dany himself. He was working away on a new technique. Score!

And he had some other pencil shaving pieces too. Double score!

This is the piece that we got. It’s clearly a modern technique (who would ever think pencil shavings would be so amazing?) but he’s using traditional Cambodian symbolism using shapes like a fish egg, lotus flower, etc…

I am thrilled we were able to acquire this, mostly because it’s stunning and I’m mesmerized by it. But we’re also thrilled to be proud owners of a piece from such a talented up and coming Cambodian artist.

7 Responses to “The Hunt For Pencil Shavings”

Click here to cancel reply.
« Kep: A Vacation From Our Vacation

Kep: A Vacation From Our Vacation

In Kep we got out and about a bit more than we did in Kampot. But only a bit more....