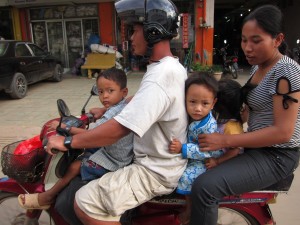 According to our guide, Saigon is home to 5.6 million motorbikes and 7 million people. Even if that number is exaggerated, motorbikes are clearly the primary form of transportation in Vietnam. The country is supposed to have as many as 20 million motorbikes total. By comparison, America had 6.6 million registered motorcycles in 2006 .  Keep in mind, America has 4 times the population and most motorcycles are used for leisure.

That many motorbikes make every alley a road, every road a 10 lane highway and crossing the street an act of faith mixed with a game of Frogger. 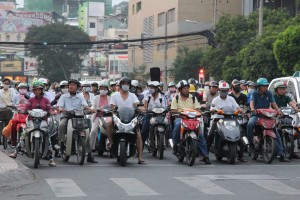 A single motorcycle is used to transport a family of 5, to move hundreds of pounds of rice, to deliver glass windows, as a taxi, a restaurant, a place to take a quick cat nap or cuddle on a date. 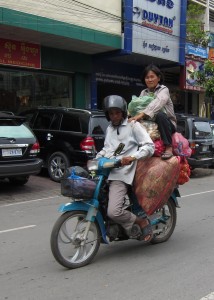 We took an excellent motorbike tour with Unseen Saigon through some of the less touristy districts of the city. It included driving through markets barely wide enough to walk through, and watching TV while waiting for our motorbike ferry to arrive. 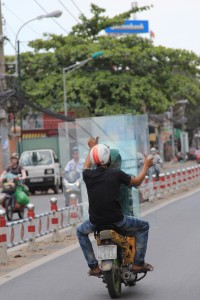 We also discovered on the tour that under certain conditions motorbikes eliminate the need for stoplights. For example, we approached an on ramp to a highway at about 30 miles per hour. At about the same time, I watched two other motorbikes speed toward the same intersection from our left at the same speed. Doing some subconscious geometry, I deemed this a collision course likely to be fatal and tightened my grip. My driver, apparently working from a more advance math book, slightly increased our speed. The first motorbike crossed the intersection ahead of us with about 5 feet to spare. The second crossed just behind us with about the same, um, breathing room.

In the center of one of the biggest roundabouts in Saigon, Vietnam is an equestrian statue of Tran Nguyen Hai....