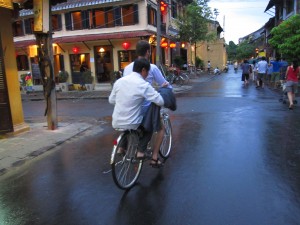 Mr. Xe and I riding to his uncle's shop.

Mr. Xe (pronounced Mr. Say) is a character out of an Ayn Rand novel. He’s about 45 years old, five feet tall, and has a flamboyant personality. While small in stature, he is a force to be reckoned with and we believe the best tailoring value in Hoi An.

Constantly moving or twitching, he is a whirlwind of measuring and note-taking. I couldn’t help but a feel like my needs came in second to his. His goal was a great suit, and making a customer happy was a secondary objective. He’s a no-nonsense kind of guy without much use for small talk unless you catch him at just the right moment. Most of what he says comes out in a half-shout — usually a command rather than a question.

I went to him for a blazer. Picked out my fabric and was ushered into the back room by his assistant to be measured. Mr. Xe came into the room and ordered me to take off my shirt and shorts — something I don’t do for just anyone. But he’s the kind of guy you don’t mess with so I complied. He must have taken 20 measurements in just 60 seconds and as quickly as he arrived he left me, standing in my underwear, wondering what to do next. 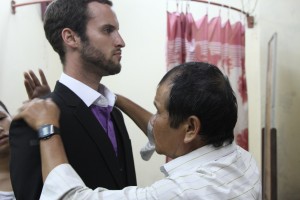 Checking the fit of my suit...

I came back the next day for a fitting. It was the best first-fitting I had at any of the places we patronized, but Mr. Xe said “This not nice!” about one of the shoulders. He told me to take off the jacket and led me out to the front step of the store and pointed at a bike. “You take me on bike!” I got on the bike and, with my jacket in hand, he climbed up on the rack behind my seat and said “Go that way.” I biked about half a mile to the shop where his uncle was making the jacket so Mr. Xe could show him the problem with the fit in the flesh.

At the next fitting, before I even had a chance to look in the mirror (Mr. Xe always gets the first look) he shouted “PERRRfect” and walked out of the room. About 30 seconds later, I determined that it was, in fact, perfect.

I liked the blazer enough that I ordered matching pants (making it a suit) and ordered another suit for good measure.

Mr. Xe and Sasha with her new dress.

Sasha also loved Mr. Xe. She had a dress made that she loved so much I had trouble getting her to give it back to them so they could finish it. On a pair of pants she ordered, Mr. Xe told Sasha it needed cuffs. It’s unclear what would have happened if she disagreed. But, of course, he was right.

And so it went, we doubled down on orders and a series of “PERRRfect!”s ensued. Until Sasha put on the final dress she had ordered. As he walked around her, he semi-shouted, mostly to himself, “Not nice… Not Nice… Not Nice.” Then, without explanation, he quickly left the store.

He came back 15 minutes later as silently as he left and sat angrily at the table not saying a word, his assistant added up our bill minus the last dress. It wasn’t up to Mr. Xe’s high standards, we weren’t even given the option to take it home.

Mr. Xe didn’t say another word to us as we left arms full of hundreds of dollars worth of clothes. No goodbye. No thank you. His assistants assured us he wasn’t angry at us — and said he was angry at the tailor. We guessed this wasn’t the first time it had happened. We felt sad parting with so much tension in the air. After all we’d been through together — we really liked him.

Later that night, we saw Mr. Xe as we walked back to the hotel. In one of those rare moments that he tolerates chit-chat, he gave us a warm hello, we thanked him and he thanked us in return and shook our hands.

For the price and quality, we think Mr. Xe is probably tough to beat.

Click here to cancel reply.
« Hoi An: "Buy something?"

Hoi An: “Buy something?”

I was supposed to hate Hoi An. This tiny city on the coast of Vietnam is infested with tourists, has...