« Cheeseburger: No Cheese, No Burger

Accessory to a Hit and Run 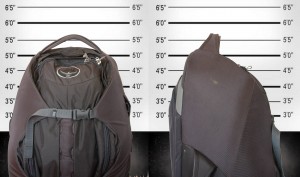 We disembarked from our Sapa to Hanoi train just a few minutes shy of 5 AM. We made our way in the darkness through the crowds to the street to hail a taxi.

After dodging a couple of offers that were about three times the going rate, I stopped a taxi in the middle of the street. His price was fair and he knew the location of our hotel, so I called to Sasha who’d been guarding the bags.

I put our first bag in the trunk while he was still in the middle of the street. By American standards, I know that sounds pretty rude, but by Hanoi standards we were in a taxi loading zone. Of course the onslaught of cars and motorbikes pressed forward and the taxi angled for the side of the road. I went for the second bag as Sasha was getting into the car. That’s when things started to go wrong.

First, the taxi driver ran over a motorbike. Fortunately, no one was on it. Then a policeman, seeing the motorbike crushed under the front fender of the taxi, came running to the car. Scared, the driver put the car in reverse and backed off the motorbike, turned away and sped down the road with the rear hatch wide open offering a final glimpse of my bag.

If it had arms, I’m certain it would have waved.

Sasha yelled “No, no, noooooooo!” as I began running after the car. Lingering in my ears it was compelling reminder of just how crappy the situation was. Due to traffic, I gained on the car for the first block with images of a valiant rescue flashing through my head. We stayed about even on the second block – just 20 feet separating us. But on the third block, the advantages inherent to an internal combustion engine became apparent.

I was still running when a motorbike pulled up next to me and said, “Get on.” I did, and we gave chase for a few blocks, embers of hope still glowing, but in the AM darkness the taillights started to blur together and we lost the taxi.

I returned to the train station meeting up with Sasha knowing we’d never see the bag again. It wasn’t the end of the world, nothing critical was in the bag, but a mountain of annoyance lay ahead of us in getting things replaced. Our first step was to get a police report written-up so we could get our travel insurance to pay for what was stolen.

Sasha found a police officer. Oddly, he told us to wait at the place where the taxi sped off since the taxi driver would probably bring the bag back. Then the officer walked away.

We couldn’t tell if he was trying to get out of writing a police report, but we complied almost out of confusion. As we waited, a couple other people seemed to confirm this idea that the bag might be returned. So we waited still longer.

No luck. We called the hotel to see if he’d brought it there. Nope. Sasha set out again to file the police report. I waited… still hoping.

Sasha returned with two Vietnamese men – one of whom was an eyewitness the other a translator, neither police. The eyewitness knew which taxi company the guy worked for. The translator explained if we went to the taxi company we’d get the bag back. 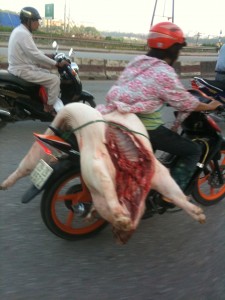 With the sun rising over Hanoi, I found myself on the back of a motorbike, with the translator, 5 km from the train station watching the city come to life. I saw hundreds of people doing Tai chi in the park, three huge gutted pigs strapped to motorbikes and tried to appreciate this redeeming aspect of losing all of my clothing, camera chargers, etc.

Hanoi whizzed by. As we drove, the translator explained that police may shut down a taxi company entirely if an allegation of theft is made by a tourist. As a result, it was in their interest to find the driver and get the bag back to me before the police got involved. Still, it seemed a little far fetched to me, but I was going with it.

We got a little lost, but when we finally arrived I discovered the taxi company — at least at 6 in the morning — was run by two 14 year olds. I looked at a directory of drivers that included mug shot-like photographs. The 14 year olds did their best to call drivers on the radio and by phone, but it wasn’t looking good.

Sasha had agreed to stay at the station and begin the police report process if I didn’t succeed. The eyewitness had been looking after her, found her a stool and even warded off some of the touts she was getting while she waited. When she decided to go to the police station he walked her there but didn’t go in with her. According to Lonely Planet, filing a police report means that everyone involved gets shaken down for money — so no one wants to be involved.

Sasha described the police station as three completely empty desks, save the police officer sleeping on top of one of them, and a filing cabinet. Sasha was filling out the form when she heard a commotion outside.

She saw the flurry of a man in a hurry. In his wake, sitting alone on the sidewalk outside the police station in the morning light, there it was.

My bag was back, unharmed.

After calling me to let me know the good news, Sasha returned to the train station. To her surprise, folks there already knew it had been returned. The taxi driver came by and been directed to the police station to find her. We later learned that the driver had in fact tried to return it to the hotel as well.

We met the translator for dinner and beer. He told us the motorbike the taxi driver had run over was a police officer’s — not good at all.

Strangely, we felt a little bad for the taxi driver in the end. He screwed up for sure, but he wasn’t trying to steal our bag. He spent two hours trying to return it, even at the risk of being caught, because the weight of the law here is so severe, the police so powerful, that when they do decide to administer justice an entire life can be bulldozed in the process.

4 Responses to “Accessory to a Hit and Run”

Click here to cancel reply.
« Cheeseburger: No Cheese, No Burger

Cheeseburger: No Cheese, No Burger

With an hour and twenty minutes before our train. Sasha and I joined some new friends for one last meal...