Cheeseburger: No Cheese, No Burger

With an hour and twenty minutes before our train. Sasha and I joined some new friends for one last meal together. We ate at a place called Fan Si Pan — fitting because I met them climbing Mt. Fansipan.

Before we ordered, we made sure they could get us our food in time, since there isn’t any food on the 9 hour train ride. We had to be across the street at the train station at 7:35, so we asked for our food by 7:10.

We ordered three cheeseburgers and Sasha ordered a sandwich. Ten minutes later, Sasha’s sandwich arrived which she quickly began eating. At 7:30, two out of three “cheeseburgers” arrived. Not perfect, but our friend’s train left an hour later than ours, so it was better than nothing. Or so we thought…

We alerted our server, who didn’t immediately recognize the problem. He took the burgers back — presumably to add the missing contents. Three minutes later, “cheeseburgers” were placed before us again.

I lifted the top bun. They had successfully added cheese, but failed to add the burger (pictured).

Out of time, Ritz crackers and trail mix (kindly tendered by our new friends) were my supper. 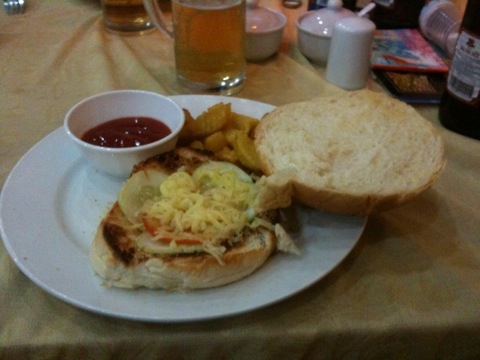