Clueless in China: Not Face Cream

I’m on a long train ride in China from Guilin to Jishou (valuable time to write) and there are officials coming through the train car selling different things with an elaborate pitch that keeps the passengers captivated for 5-10 minutes.

First came the portable eating utensils kit (mini-fork, ity-bity spoon and collapsable chop-sticks), then the portable unbreakable make-up mirror, which was slammed on the ground a few times to prove its effectiveness (shockingly it didn’t break), and a UV pen that could show the difference between counterfeit money and the real stuff (this was a big seller).

Then came a tub of something. With no pictures, only Chinese writing on it, I had no idea what it was. Then they set one on each train table to tempt you to buy it. The mother and daughter across from me opened and smelled it. I stuck my head towards them and they let me smell it too. It was subtle but sweet smelling. I made a rubbing motion on my face to ask if it was face cream. They broke out into giggles as they made the same rubbing motion on the table. D’oh! It was a cleaning product that was then being demonstrated by the seller on the train car ceiling!

We had a laugh with each other every time we made eye contact after that. So embarrassing!

See the below pic for my “face cream.”

Sometimes its an adventure to be totally clueless while traveling. 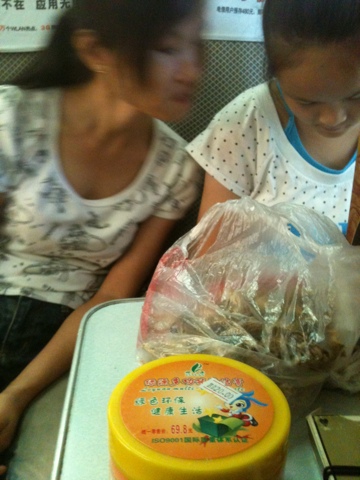 One Response to “Clueless in China: Not Face Cream”

It's motorbike madness in Vietnam. That's why we were unprepared for what we found in Guilin, China. Electric motorbikes. We didn't...