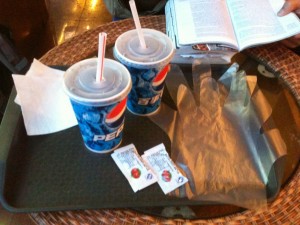 While we have a ton in common, there are many things about China that are so different from our life at home and sometimes it’s just plain perplexing to us. Without anyone to explain, Josh and I observe, take pictures to try and figure it out later or just to remember. If no explanation is available, it goes on the unexplained list.

But that list is getting smaller as we’ve enlisted Lua, our friend who we stayed with in Manila, Philippines, to help explain the unexplained. Lua, who is witty and has excellent taste in desserts, was raised and educated in Macau (a Special Administrative Region of China) and still calls it “home”. In our opinion, that makes her plenty expert enough to explain the unexplained.

Here was our first exchange on plastic gloves:

ME: “We’re waiting for some quick food at a Chinese train station and, in advance of food, out come our drinks, napkins and plastic gloves. Plastic gloves? Confusion set in and did not get eliminated with arrival of food. I mean, we’ve seen people peel grapes before eating them [ingenious solution to eating them on the go when you aren’t in a place to clean them first], but the flip side is that people spit big ones in a train car aisle and the food vendor blows their nose with their hands. So, I’m confused by the sudden addition of plastic gloves. Please explain!”

LUA: “It has to do with the 1 meter of personal space. Inside the 1 meter everything must be pristine and germ free.. observe that the nose blowing involves leaning outside of the 1 meter, and spitting is also outside that box. Food to be consumed is within the one meter, and really hands can be dirty so it’s better to put on gloves to keep clean.  Its all a question of proximity :)”

ME: “…Despite the man who just spit between his legs while sitting on the bus this morning, your theory rings true.”

LUA: “…the guy who spit between his legs was being polite. There must have been someone outside of his 1 meter who would have had the spit go into their zone (perhaps even you guys?)– so the polite thing to do is mess up his own zone rather than infringe on the others’. Spitting into someone’s zone (unless it’s an accident) is the western equivalent of slapping someone.”

We're pretty daring eaters but there were more than a few things we didn't venture to try in China and...