« How to Eat Sichuan Hot Pot

In Love With Red Pandas

You may think that there are panda’s running around China like squirrels at home, but you’d be flat out of luck to find any. Seriously. Your best bet is to visit them, like us, in Sichuan province in the city of Chengdu where there is a Panda Breeding Base.

It’s not like we’ve never seen pandas before. There are pandas at the Smithsonian National Zoo in DC. In fact, the DC zoo is a partner of the Breeding Base in Chengdu so I assume that’s where the DC pandas are on loan from. But I suspect the Chinese are watching the DC zoo as they’ve let three pandas die before their time in the past few years.

And they were red pandas too.

Their deaths are even more of a loss to me now because I’ve decided, after visiting Chengdu, that the red pandas are my absolute favorite of this adorable but dumb-as-a-rock group of cuddly animals. 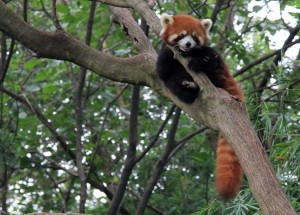 Red pandas you say? Everyone knows and loves the black and white giant pandas, so why am I going on about the red pandas? Here’s why: They’re brown. Yes, despite their name, their coat is more brown than red. I can relate. I like brown. And they’re adorable. With their teddy-bear face, raccoon-like tail and fluffy ears all in a package small enough to scoop up and take home, who could resist?

Okay, okay, the giant pandas, that are a mascot of sorts for China as well as DC, are pretty great too. 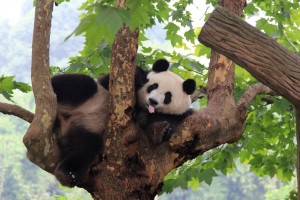 Everyone recommended that we get to the Chengdu Breeding Center early in the morning when the pandas are their most active. So, we set out through the Chengdu smog at 8am, barely able to see three cars in front of us the pollution was so bad. And they were right. I’m not sure if the handlers coat the bear’s bamboo with caffeine, but they were more active than at any zoo I’ve ever seen. It was amazing. And there were so many.

We saw perhaps 25 giant pandas, 8 red pandas and about a dozen newborns in their incubators. It felt like the incubator room was literally the future hope for the species’ survival. They are lucky the world agrees they are adorable and spends a ton of money ensuring they’re survival because otherwise I’m pretty sure they would already be extinct. How else could an animal survive that:

The red pandas on the other hand eat more than bamboo and are much quicker on their feet. I have hope for them. As long as they’re not sent to the DC zoo that is.

Now, if only I could bring a red panda home…

One Response to “In Love With Red Pandas”

How to Eat Sichuan Hot Pot

According to the guidebook, the Sichuan region is famous for spicy food cooked with Sichuan pepper. This special pepper numbs...