« Off To The Races @ Happy Valley

Posted by Sasha Bruce on Thursday, September 15, 2011 · Leave a Comment 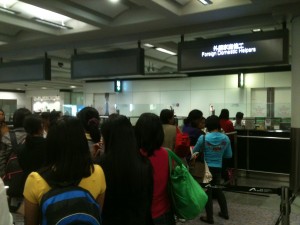 Taken at Hong Kong airport immigration, the sign identifies a lane only for "domestic helpers."

In Hong Kong “domestic helpers”, as they’re called, make up 3% of the population. Over 90% are from Indonesia or The Philippines.

As I understand it from friends who live in Hong Kong, these workers live with their employers and perform jobs like child-minding, cooking and cleaning. Hong Kong apartments are small, even when you have money. So they’re living as good as the family in some cases. Which, compared to reports on how, say, employers in Saudi Arabia have been treating their migrant domestic helpers, Hong Kong doesn’t seem like a bad gig if you have to do it.

We were struck by this segment of workers before even entering the country as they have their own dedicated immigration line at Hong Kong’s international airport.

Not sure if it’s a helpful line making things more expedient for a steady flow of people or a negative way of singling them out.

Either way, I snuck a photo.

Click here to cancel reply.
« Off To The Races @ Happy Valley

A Wednesday night in Hong Kong saw us at Happy Valley racetrack. The track is lit by floodlights and is...