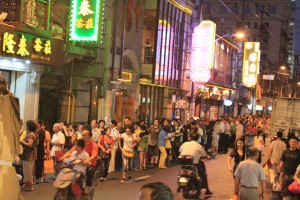 As we’ve traveled, we’ve seen countless differences in the way individuals and groups behave in the course of their daily lives. Some make us wonder why we don’t do it that way at home, but others make us grateful we do it the way we do.

Today, I’m grateful for lines — the kind that people stand in. Lines that have approximately 2 feet of space between people. Lines where you might strike up a conversation with your neighbor. Lines that are orderly and respected by all. The kind of lines we all take for granted.

Entering China, one must first give up personal space in line. Different, but not a big deal. Conversation with strangers is next. We think it’s probably just the language barrier, but we definitely wouldn’t be surprised if line-mates were considered enemies. But I wouldn’t be writing this if it weren’t for the last, squirrelly little point: orderly and respectful lines.

It really is a small miracle that lines form at all in China, though it turns out it wasn’t long ago when they didn’t. In advance of the Beijing Olympics, the Chinese government apparently put a real effort into teaching citizens about lines and how to use them.

Based on our observations roughly 70% of Chinese people today recognize the idea of lines and 30% of people don’t. What does that mean? A hundred people (from the 70% group) might form a line at the train station waiting to board a train. Roughly two minutes before the expected boarding time the 30% decides it’s time to get in on the action. Dozens of people simply push their way through the line to the front until all physical space is completely exhausted. Alternatively, individuals or entire families, including grandma, will climb over chairs to gain access to the front of the line. For someone born and raised in a culture where lines are the norm, it’s like watching widespread petty theft, but I digress.

The most confounding piece of this puzzle isn’t the cutting. It’s that the 70%, many of whom waited in line for 30 minutes or more, don’t seem to even notice, let alone care.

In America, I’ve seen fights break out between adults as a result of similar line-related transgressions. But in most circumstances, I believe it is the collective heckling and hissing of a line in America that preserves order. It seems to me public shaming of cutters hasn’t been discovered here just yet.

At some point, the line to board the train, the bus or to enter the tourist site begins moving. This is when it gets dangerous. Remember, by this point, we’re like cattle pressing against the railing waiting for the gate to open. The gate, door, or whatever opens and a bottleneck is instantly created somewhere. To get through the bottleneck successfully you need strength, agility and momentum. You’d be surprised how many people can fit through a doorway at the same time. Today I saw a grandmother shoved down a few steps of a moving escalator — she just wasn’t quick enough.

America and all line-loving countries, thank you.

One of the best parts about this year on the road has been meeting new people and seeing old friends....