« Scorpion on a Stick? 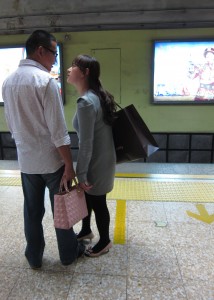 All over China we have seen men carrying their girlfriends handbags. More in the urban areas, but it’s pretty much been a constant sight. And it’s baffling to me. Baffling because we see it most in one of two situations:

Why? And why aren’t they concerned about what other hot blooded males will think of them? 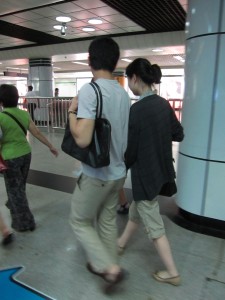 I like to think that a little bit of all of these is true. Even though I think it’s strange, the reason that men do it has to come from a good and loving place. They just don’t know or don’t care that, to us, they look silly while doing it. But why should they?

Perhaps our cultural equivalent is opening doors for women. It shows affection and comes form a place of old-fashioned gallantry. Some women don’t like it for solid feminist reasons, but let’s assume you’re like me and you do. People from a different culture, where women wouldn’t dream of letting men open their doors, might think we’re utter weaklings!

But in this pressing research, I also found, that the women of China might have some competition. Chinese men are carrying their own designer handbags!

In fact, it seems that men in China represent 45% of the $1.2 billion (yes, billion) market for luxury handbags. Compare that to 7% in the U.S. That’s a lot of man purses! And to be clear they are purses, not messenger bags, I just thought that they were ALL carrying their woman’s bag. Turns our 45% belong to them. 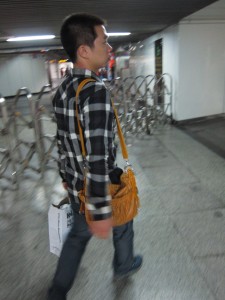 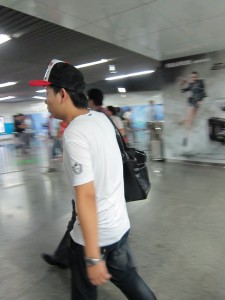 Click here to cancel reply.
« Scorpion on a Stick?

Scorpion on a Stick?

After exploring the Silk Market and dinner with new friends, we headed to Wangfujing on our first night in Beijing....