Sasha and I were excited to see the famed Terracotta Warriors – over eight thousand human sized, 2200 year old Chinese warriors, each entirely unique, buried with Qin Shi Huang the first Emporer of China to protect him in the afterlife.

Located in Xian, a sleepy town of over 10 million, the Terracotta Warriors are the most notable tourist destination in town. Since this week is the busiest week for tourism in China, because every one has a holiday, the city is packed with Chinese tourists. And in a country of 1.3 billion, that’s a lot of people on vacation.

From our hotel, we took a taxi to the bus station and waited in an epic line for a Terracotta Warrior bus. We confirmed our destination multiple times before boarding and drove the hour it takes to get there. Upon arrival, the bus emptied and we walked for 10 minutes along with the crowd, enduring touts from sellers of miniature Terracotta Warriors.

At the gate, we paid admission, which wasn’t cheap, and entered. Following Lonely Planet’s advice we wanted to view the three pits of the warriors in a particular order, so we headed for the information booth. Translation was difficult so we focused our efforts on the Chinese map we had in hand.

We were pretty sure we were at Pit 3 and penguined into the crowd to get into viewing position – a challenging task given the hordes. We were less than impressed. Pit 3 was empty and tiny stone pit. No warriors anywhere. So, we decided to make our way to Pit 2.

Setting our sights on Pit 2 brought an incredible revelation that neither of us are likely to forget. It was also empty and devoid of a single Terracotta Warrior. It was then that we realized that we were at the wrong tourist site. We had been looking at the remains ancient hot spring bathing pools. We were also experiencing our biggest language fail to date. We left confused and wondering why domestic tourists were fighting and squeezing their way in to see completely empty stone pits. 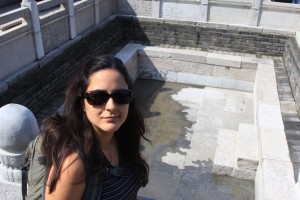 No Terracotta Warriors to be found.

Fortunately, we weren’t far from our actual destination. Apparently, people visit the Huaqing Hot Springs as part of a circuit of sites to visit. When we arrived we paid for a second set of even more expensive admission tickets and found ourselves back on track to see the Terracotta Army.

The real warriors and horses were impressive and the scale of the place is hard to describe, but the experience was overshadowed by the insane crowds we had to contend with. We were happy to see them, but just as happy to leave.

Our pictures are below:

We ventured to the Chinese acrobatic show on one of our last nights in Beijing. They could easily be recruited...