« These aren't the Terracotta Warriors You're Looking For

Posted by Sasha Bruce on Saturday, October 8, 2011 · Leave a Comment

If we had any trepidations about going to Tibet on this trip, they were alleviated when we learned the Dalai Lama gave his okay for his supporters to go as tourists. But how to get there? Well, that was never in question… The highest elevated train in the world, of course! 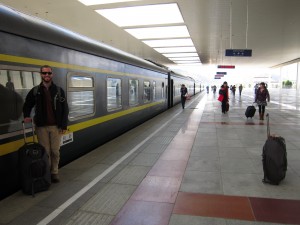 The Qinghai-Lhasa railway is so high that they pump oxygen into the train cars (its highest point is almost 17,000 feet over sea-level). Apparently it’s an engineering wonder since much of the track is built on permafrost. So, before all that permafrost melts with climate change, we figured we’d give it a ride. 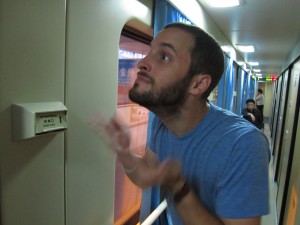 The train starts in Beijing and takes 66 hours to go to Lhasa but we jumped on in Xian which took a mere 36 hours.

The week we were seeing Xian and planning to head to Tibet was a national holiday in China. And when the world’s most populated country goes on holiday it pretty much feels like a mass migration. It made seeing the Terracotta Warriors a bit of a nightmare and buying train tickets to get to Tibet even worse.

The Chinese don’t make it easy for foreigners to get to Tibet on a good day, making us apply for costly permits, listing exactly each place (city and specific sites) that we plan to visit and having a guide with us 24/7. They make it difficult, if not impossible for foreigners, to buy train tickets without an intermediary. Add to that the demand with the national holiday and we had to resort to what felt like buying tickets on the black market. In fact, that’s likely what we actually did, but we didn’t ask too many questions. We asked our Tibetan tour company to try and find someone that could deliver tickets. We passed off $100 more, per ticket, in cash than they were worth. We held our breath that they were not fake tickets and left the hotel at 5am to catch the train. We breathed a sigh of relief and relaxed in our four-berth sleeper compartment after the the inspector punched our tickets, letting us know that they were legit. Phew.

For the first 15 hours, we shared our compartment with a man who got off at the Na Qu station, which was our last stop before the end of the line at only 15,000 ft above sea level. Then we were lucky enough to have the compartment all to ourselves. Woo hoo! 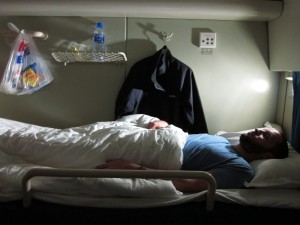 JFAP sleeping in the top bunk.

Our train car was pretty swanky given our expectations, but we were also very lucky to be in a four-berth sleeper cabin. It was festive to walk the hallways of the train where we met families in full Tibetan garb, Chinese workers going back to their post after a visit home and saw all the wild-looking food that folks brought to eat on this long-haul – one huge pile of bones as thick as my thigh was particularly impressive.

Through our train windows, we watched the ongoing expanses of uninhabited land fly by and the mountains start to roll higher and the snow appear lower.

In the middle of nowhere we saw an endless convoy of Chinese military trucks – we counted over a hundred. Eerie. 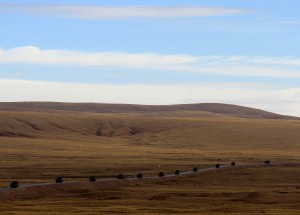 Chinese military convoy in the boonies

Over dinner in the dining car we spotted our first yaks. 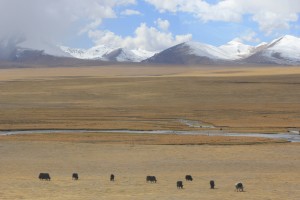 We happily said goodbye to the blinding smog of China.

Click here to cancel reply.
« These aren't the Terracotta Warriors You're Looking For

Sasha and I were excited to see the famed Terracotta Warriors - over eight thousand human sized, 2200 year old...