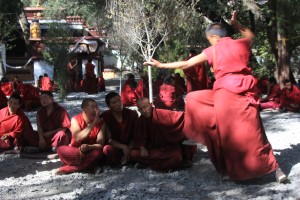 When our guide said we should go watch the monks debate, we thought he was using the wrong word. But it turns out monks are the liveliest and most compelling debaters I’ve ever seen, even though I didn’t understand a word.

As we approached the courtyard of the Sera Monastery, we could hear yelling and slapping in the distance. Entering the courtyard doors brought into view about 75 monks in small groups ranging from 2 to 10 in size.

The basic setup seemed to be 3 or so monks sitting on the ground with one standing over them them yelling or screaming questions. But in place of question marks, the monks did something even more out of character than screaming at each other. I would describe it as a combination of baseball pitch and a clap, but the video will demonstrate this better than words. We even saw a couple of the more lively question askers push and wrestle for what appeared to be the opportunity to ask questions.

We learned that this kind of debating, which is used to deepen monks understanding of the scripture, is unique to this monastery.

When we return, if you find us clapping our hands when we ask you a question, you’ll know why.

Celebrating Josh with a Lhasa beer, that makes you a little more out of breath when you're at 16,000 feet,...