« The Big Top: Everest Base Camp

After our time in Lhasa, we spent 4 days driving to Tibet’s southern border with Nepal, stopping at monasteries along the way.

Tibet is a land of extremes. It has an average altitude of 4,500 meters (14,800 feet) – the highest in the world. Our bodies were particularly aware of this fact on the high mountain passes where a short walk from the car to the lookout point was a workout. The landscape itself could easily be lifted from the photos sent back by the Mars rover. Huge red cliffs and valleys often devoid of vegetation or life. I saw the bluest lake I’ve ever seen. And with your face in the sun and your feet in the shade, it’s an environment that makes simultaneous sunburn and frostbite a real danger. 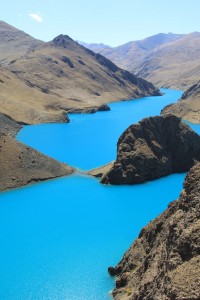 The bluest water I've ever seen.

But what stood out most were the people. There aren’t many, but they’re tough and appeared in the most unlikely of places. The road we were on snaked up and down mountains, through valleys, and frequently stretched to he horizon. We often drove hours without seeing another person, which is why we were surprised to see a pair of older women sweeping the mountain road with brooms without a support vehicle/animal anywhere in sight. But really it was no different than the yak herders we saw enduring the harsh climate across the country. 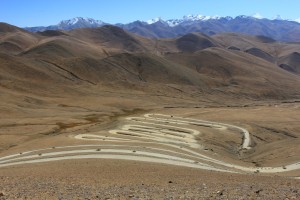 We were lucky to be there during the barley harvest and we saw farmers in various stages of harvest throughout our drive: cutting the barley stalks, loading wagons, and separating out the grain. Finally, when we saw a particularly large group we asked to stop. 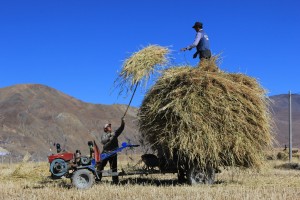 Sasha and I headed in different directions and befriended two groups of farmers. I ended up on a tractor sharing some of the photos I’d just taken. Sasha ended up working the harvest. Fortunately for me, I joined her just in time for a barley wine break. 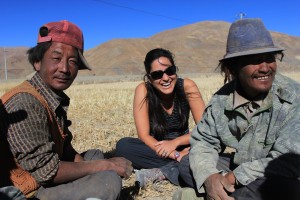 The stereotypical Tibetan for me posses a worn, weather-beaten face, often showing evidence of frostbite or sun damage, due to the difficulty of being alive in Tibet. But beaming through it is always a huge smile that matches the warmth of their hearts.

The smiles of the farmers that that afternoon will stay with us both for a long time.

Okay, so braving base camp on the Tibetan side isn't as hard as it sounds. No week of climbing in...