This advertisement was the first thing to greet us in Cairo as we disembarked from the plane. It’s a billboard for Mobilini, a cell phone company here that quotes Obama speaking about Egyptian revolutionaries. 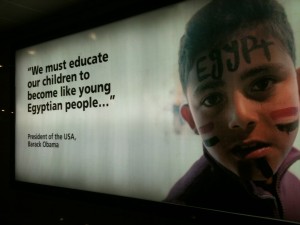 The only problem is that, while the sentiment is positive, the quote doesn’t seem to be real.

It seemed odd to us that any American President would explicitly say that American children should be like people from any other country. So we googled and googled for where the quote came from and this is the closest that we could  find: “Today belongs to the people of Egypt, and the American people are moved by these scenes in Cairo and across Egypt because of who we are as a people, and the kind of world that we want our children to grow up in.”

Maybe I should send an email to Mobilini letting them know!

We were lucky to "bump into" United's #1 employee yesterday in London at Heathrow airport, on our way to Cairo,...