Last night I had a dream that I was working an election where no one, including candidates, were sure of who was going to be on the ballot until two weeks before Election Day, where no one knew what the ballot physically looked like, and most of the country still doesn’t know where they can vote.

Meanwhile, there are revolutionaries in the streets calling to overthrow the interim military-government who is retaliating by force, oh, and just two days before Election Day voting was extended to two days instead of one. Then I woke up and realized it wasn’t just a dream. Josh and I are in Egypt and Election Day is tomorrow! 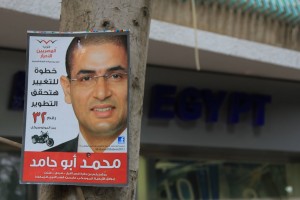 Campaign poster. Note the motorcycle symbol. There'll be a separate blog post devoted to just this.

We’re already learning a lot from our experiences here in Egypt where we are working for the National Democratic Institute (NDI). We’ve been here since early November and will be here through the last of the election rounds in early January. We’re tasked with working on a Voter Education campaign called Ally Sotak, or Raise Your Voice (en.allysotak.com) that’s doing amazing work with 40+ organizers around the country who are focusing on rural and minority voters. And we’ll also be joining the official election observation mission for Election Day. In our free time (there’s not much), we are trying to see some of the sites. We’ve seen the Great Pyramids, the sphinx and explored our Cairo neighborhood so far. 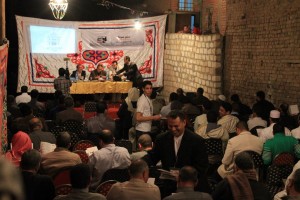 It’s an exciting time in Egypt and regardless of what you think about the situation here it’s an important time for Egyptians.

The Egyptians we’ve met have been warm and welcoming to us, and eager to share their many different views of the situation here and their experiences during the January revolution that ousted Mubarak.

We had dinner with two brothers who run a tourism business. In January, they were in Tahrir Square, the symbolic center of the revolution, with hundreds of thousands of others, demanding President Mubarak to step-down. In the months since, tourism has tanked due to instability and they’ve had to sell their tour bus to make ends meet. Despite their hard times the oldest brother said they would do it again, that things might be bad for a few years, but ultimately the country will stabilize. And that a free Egypt will be a better country for their children. 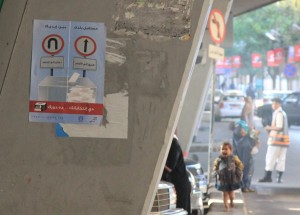 "Ally Sotak" poster urging people to vote. Translation should be clear from visuals: turn around and go back to the way thing were, or go forward by casting your vote.

But we’ve talked to others eager to tell us that the protesters are causing the country to “go down.” According to one taxi driver, protesters are the ones making life hard by causing instability. They wish the protesters would be more patient and expect a normal pace of change instead of demanding democracy overnight. And these diverse viewpoints are just minutes from Tahrir. From what we’ve heard, the majority of the country has limited information, are against the protest, or want stability now regardless of who’s at the helm. At the same time, everyone is trying to figure out how exactly their first election is going to work. I think it’s safe to say that the political situation will not be resolved before Election Day  — since it’s tomorrow.

We’ll definitely be posting more about our two months Egypt but we won’t be sharing too much election analysis on the blog since we’re here for work. We will also be catching up on pictures and stories from our time in Tibet, Nepal and India. Please forgive us if you get a back dated email or two. They were amazing experiences, particularly Tibet, and we still want to share them with you.

I head to Fayoum for three days to observe the election there and Josh is observing the district in Cairo that includes the famed Tahrir Square. The first two days of the election (actually 12 voting days in total) are November 28 & 29. 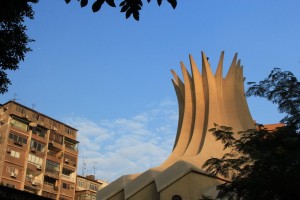 View of our apartment building taken from the Sudanese refugee church across the street. 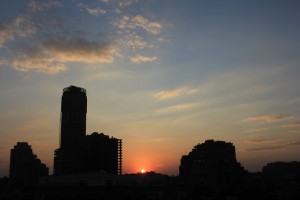 View from our balcony at sunset.

This advertisement was the first thing to greet us in Cairo as we disembarked from the plane. It's a billboard...